Aquaculture is developing internationally and in the Mediterranean at a sustained speed, manifested by the continuous increase in production. This activity has grown considerably in some regions of the world and today provides more than a third of the world’s aquatic resources. This phenomenon explains why aquaculture is particularly interested in the cultivation and breeding of species of high economic interest, well remunerated on the market.
Like most countries in the Mediterranean basin, Tunisia is no exception to this global phenomenon, since production from species with high commercial potential is close to the limit of available resources. Aquaculture is therefore the only way to increase production, especially since our country has favorable sites to develop this recent aquaculture activity in the open sea. It also benefits from a strategic geographical position, due to its proximity to the European market and its experience in the marketing of seafood products. Thus, faced with this observation, the idea of our group was born. ‘invest in this strategic sector.

– Aquaculture is any activity of production, processing and marketing of aquatic species.
– Aquaculture consists of handling natural or artificial aquatic environments for the production of species useful to humans.
– The main categories of breeding are :

– We speak most often of breeding for fish, shrimp and culture for shellfish and seaweed.

– We can designate certain farms or crops by specific terms :

Aquaculture in Tunisia is a very ancient activity that dates back to Roman times, as evidenced by the mosaics in the Bardo Museum in Tunis.
Recent Tunisian experience in this area dates back to the 1960s. Initiated by the private sector, it started with the rearing of the Mediterranean mussel “Mytilus galloprovincialis” and the Pacific oyster “Crassostrea gigas” on fixed tables in Bizerte.The supply of mussel spat is done locally by collection in the Bizerte lagoon while that of oysters is done by importation from abroad (France, Italy,…).
In the early 1980s, one of the first private hatcheries for wolf “Dicentrarchus labrax” and sea bream “Sparus aurata” in the Mediterranean was then established in the south of the country by private operators supported by banks in the region.
The 90s were marked by the completion of the aquaculture master plan and the development of continental fish farming in inland freshwater bodies in extensive mode with, however, timid private achievements which mainly concerned land-based wolf farming and sea bream and shellfish farming in the Bizerte lagoon (fixed tables and floating lines) following the liquidation of the ONP.
Recent years have seen the expansion of floating and submersible cage culture for wolffish and sea bream. The supplies of fry and food are mainly made by imports from abroad (France, Italy, etc.).
From a strategic point of view, the Tunisian government has produced two ten-year strategies for the development of aquaculture: the Master Plan for Aquaculture (1996-2006) and the national strategy for the development of aquaculture (2007-2016).

The objective of the Tunisian government is to ensure the sustainable development of aquaculture by :

Characteristics, structure and resources of the aquaculture sector in Tunisia

With its 30 year boom and the relative stabilization of capture fisheries, there is every reason to believe that future growth in the fisheries sector will come primarily from aquaculture.
Tunisia presents a privileged situation for aquaculture with its coastline of 1300 km in length, allowing the development of a large number of coastal water collections.
Under the effect of the drop in the selling prices of the fish produced and the severe competition from Mediterranean producers, aquaculture in Tunisia went through a period of total stagnation until the time of the establishment of fattening farms. in the open sea.
The evolution of this technique, which consists of raising fish in floating cages in offshore areas, has opened up new socio-economic perspectives.
Aquaculture in Tunisia is evolving with an annual growth rate of 20 percent until 2014 when it was stable due to the increase in exchange rates (euro / dinars). Current production is around 20,000 tonnes (2019).
The value of exports from the aquaculture sector was around 20 million Tunisian dinars (TND) in 2014 (equivalent to almost USD 11 million).
The aquaculture sector currently offers more than 2,000 direct and permanent employment positions.

Regarding institutions, the Ministry of Agriculture is responsible for aquaculture. Its mission is to carry out, in coordination with the ministries concerned, the State policy in the agricultural and fishing field, to ensure the promotion of this sector and to favor the creation of a favorable climate for its development.
In addition, in application of Decree No. 2001-420 of February 13, 2001 fixing the organization of the Ministry of Agriculture, the Ministry is divided into technical services including the General Directorate of Fisheries and Aquaculture and the General Directorate of Veterinary Services.

The Act fisheries and aquaculture Framework The main legislation governing the sector of fisheries and aquaculture in Tunisia is the law 94- 13 of 31 January 1994 on fishing activities. Its purpose is to « organize the fishing effort in the various fishing zones, to rationalize the exploitation of aquatic species, to protect them and to preserve their living environment ».
Fishing in Tunisian waters is subject to obtaining an authorization, the granting conditions of which and the related fees are set by regulation.

Section 2 - General overview of the group

1- Presentation of the founder

The MEDIMEGH AQUACULTURE GROUP was founded in 2009 by Mr Chebil MEDIMEGH and his sons.
Mr Chebil MEDIMEGH is a businessman who had a consolidated experience in the business world since the 80’s (more than 30 years) through several companies operating in the clothing industry.
In order to diversify his investment portfolio, Mr. Chebil had been committed, since 2009, to investing in the field of aquaculture through the creation of a first breeding farm « Tunisian Teboulba Fish ( TTF) ».
Then, Mr. Chebil continues to increase his investments in the aquaculture sector benefiting from his experience in this field for 11 years which has become among the best players in Tunisia.

In order to better assist, manage and supervise the subsidiaries and to develop synergies between them, the group’s management is committed to the creation of a holding company that will have the following main roles :

The group is organized into two areas of activity : 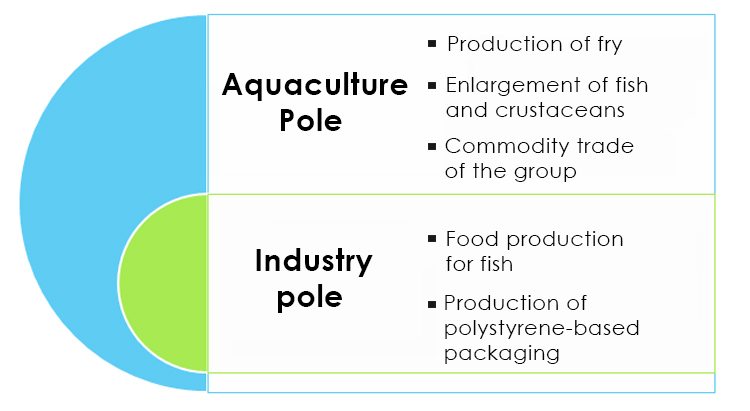 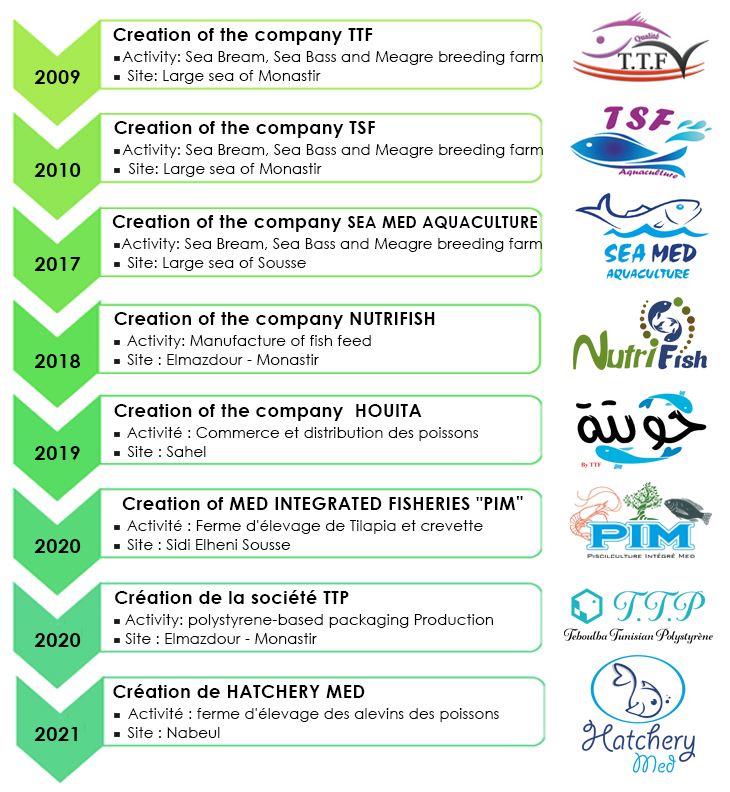